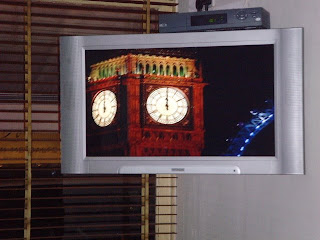 Happy New Year!
2008 seems to have whizzed by faster than a fast whizzy thing and I am finding it a little hard to believe that here we are again, toasting in another New Year. Although I nipped back to London to celebrate with friends, I'm now back on the Isle of Wight enjoying the final night of my hibernation. I'm trying not to think about the fact that tomorrow I'll be heading back to town to the grit and grime of the daily commute. Quite a contrast with the quiet, peaceful beauty that can be found here... 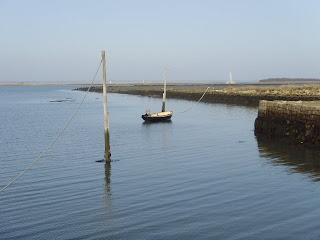 The passing of the year is a time to reflect, but also to look forward. Food-wise, 2008 was an exciting year in the kitchen for me. I cooked many things for the first time and been more experimental than ever before in the kitchen (bearing in mind that I'm essentially a fairly traditional cook). In 2009 I hope the trend will continue and I have a few culinary resolutions which I'm going to share with you alongside the highlights of last year. 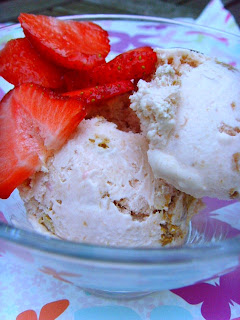 I'm starting with ice-cream. Though I received my ice-cream maker in 2007, it was in 2008 that I really started to get to grips with it and discover just how good (and easy) homemade ice-cream can be. The texture is completely different to store-bought and I'm not sure I'll ever be satisfied with the latter again (...unless it is Ben and Jerry's cookie dough flavour). My favourite of 2008 has to be this 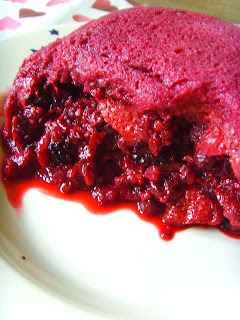 My next highlight involves a moveable feast. I just love the way the British are so very... British about the weather. Cold winds and torrential rain couldn't dampen the spirits at either of the outdoor events I attended this summer. It is without question that food always tastes better outdoors and in good company. I was particularly pleased to present my favourite

summer pudding as the dessert when I went to Glyndebourne for the first time. The picnic situation at this spectacular opera event is quite hilarious - some even bring their own butlers, candelabras and table centres to their picnics. But everyone look on with envy as I turned out the perfect summer pudding (transported in the pudding basin) and then dusted the top with icing sugar (having also packed a small sieve). There is nothing like a little dramatic flourish to lift the rain-soaked spirits! 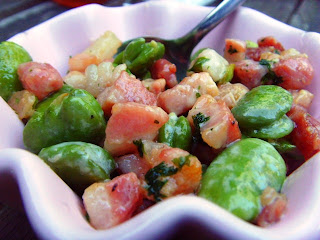 The next highlight for me has to be the epiphany I had as regards the broad bean. I'm not planning to go on about it (you can read it all

here), but let's just say that I'm glad I gave them another chance. 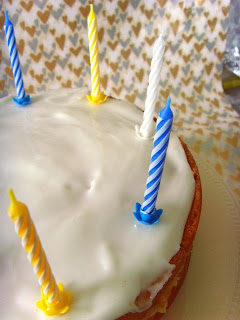 The final item which gets special mention is my

lovely lemony birthday cake. Not only was this the first item I mixed in my new Kenwood mixer (love at first sight), but it stands here for the huge enjoyment I get from baking. I've always enjoyed baking but it has become a real passion this year. Only problem is that I've as yet been totally unable to master bread baking. Which leads me neatly onto...

I could continue with highlights (lunch at Fifteen in Cornwall, my mother's chilled avocado soup, running the British Food Fortnight Challenge,rhubarb pavlova and new weeknight favourite smoked mackerel fishcakes), but I won't. There are just too many. 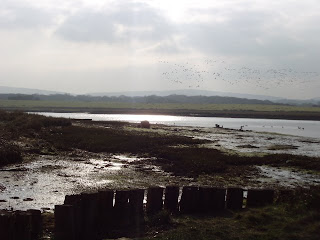 I do have one more resolution though which is to be better at making my own lunch to take to work. It might sound like an easy one but for me it is quite a challenge - I can never be bothered to do it yet I always regret it. I am however planning to start afresh in 2009 and declare it the year of the packed lunch. I'd welcome any ideas so that I can keep them varied!

'Normal' service will resume on Monday once I'm back in my own kitchen. Until then, a huge thank you to everyone who stops by my blog to read and comment. It is hugely appreciated. I wish everyone a very Happy New Year and much deliciousness in 2009! 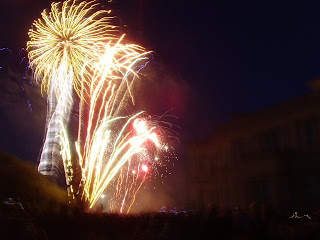 Posted by Abitofafoodie at Thursday, January 01, 2009

Email ThisBlogThis!Share to TwitterShare to FacebookShare to Pinterest
Topics: General

One of my resolutions was to make mine and hubbys lunch everyday to take to work!!

Happy New Year & I'd love to assist with lentils.

No New Year's resolutions in my house Antonia!
Quite a challenging year ahead then, especially with the lentils thing, but loving more ice cream recipes from you.
Happy New Year to you too!

Beth - I really hope to try and stick with it as far as possible. I work long hours so it is going to be quite a challenge!

Peter - I'll need all the help I can get with the lentils, thanks Peter.

Margaret - very wise. I don't usually make any but hope these are achievable!

Happy new year Antonia! You picked some lovely dishes as your favourites, I love the picnic story particularly.

We have a good lentil ragu recipe if you're interested, it originally comes from 101 Things and is lovely. It certainly made me like lentils more anyway.

Loving the resolutions, especially the ice cream! All the best

Happy New Year Antonia!!!! I spent New Year in bed with a Lemsip - just like I've done for 3 out of the last 4 years, and with no voice.
Love your resolutions.

Happy New Year Antonia!
I'm with you on the homemade ice cream, just hope we get a decent summer this year!