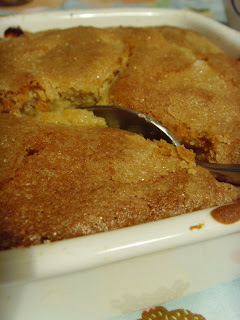 I'm continuing full steam ahead on the 'comforting' theme. All those on New Year detox diets should look away now.

There is nothing like a good British pudding (by which, to save confusion, I mean simply 'dessert' and not necessarily a creamy one or indeed one steamed in a pudding basin). I adore all the classics - bread and butter pudding, jam roly-poly, Queen of puddings, apple crumble, sticky toffee pudding. All are simply divine. Faced with a dessert menu in the fanciest of restaurants I'm predictable - I'll usually go for the classic British treat over the fanciful creamy concoction. And then I'll usually be disappointed because the chefs in these fancy restaurants have come over all clever and rather than give me a simple apple crumble and custard, they've given me some apple sorbet with a crunchy granola topping. Or something equally offensive. In my favourite restaurants, the chefs know better than to mess with a good thing.

This isn't exactly a classic British pud, but many Brits may have come across in their youth. A version of this was a highlight when it appeared on the menu in the school canteen. What we have here is a light, moist sponge with a crispy, sugary top, hiding a layer of soft fruit. Most usually, this was apple. And it was called Eve's pudding. This version uses the first of the brightly pink forced rhubarb and begs for lashings of custard. 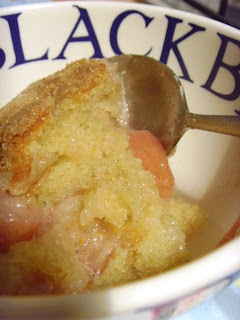 I spotted the recipe for the dish in one of my favourite cook books: Annie Bell's

Gorgeous Desserts. I followed her basic recipe but made a few tweaks. I love the combination of ginger with rhubarb, so rather than flavour the sponge with lemon, I added a little ground ginger and cinnamon. I also grated a little orange zest over the rhubarb and cut down on the sugar added to the rhubarb.

This is best served hot, straight from the oven but I found myself quite happy picking at it the next day once it has cooled. 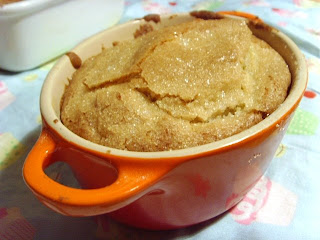 1. Pre-heat oven to 180C. Chop rhubarb into 2cm lengths and toss with 100g of the sugar. Arrange over the base of a large ovenproof dish (2 litre capacity). Finely grate the orange over the rhubarb. 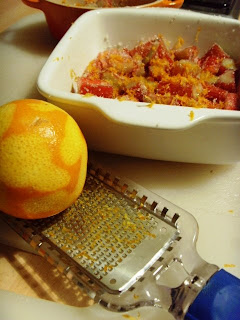 2. Take 2 tablespoons of the remaining sugar and set to one side.

3. Dice the butter and cream together with the sugar until light and fluffy - use a food processor if you have one. Add the eggs gradually and mix in - don't worry if it curdles - just add a tablespoon of the flour.

4. Mix the flour with the baking powder and spices and mix slowly into the the wet mixture. Gradually add the milk and mix to a smooth cake batter. N.B. Annie Bell suggests you pop all the sponge ingredients in at once and blitz in the processor. I only read this after I'd made it the traditional way.

5. Pour and scrape the cake mixture on top of the rhubarb and smooth over the top. Sprinkle over the reserved 2 tablespoons of sugar and bake for 40 minutes. 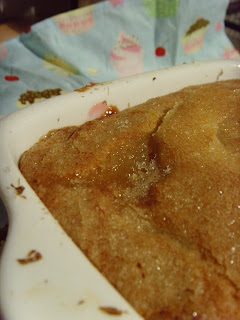 6. When it is ready, it should be crispy and browned on top. Dish up and serve with lashings of custard! 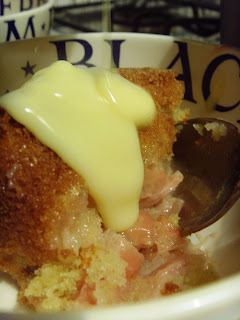 Posted by Abitofafoodie at Monday, January 12, 2009

Oooh, I really should have looked away when you told me to! This looks lovely and I love your orange dish too, is it Le Creuset?

I completely agree about the fancying up of favourite dishes, it's a real pet hate of mine too.

Rhubarb already? Wow! That's early! Wonder when we'll get it up here.

This takes me RIGHT back, like about 30 years! My dad used to make a mean rhubarb sponge. I guess it must be my turn to make it for him, now. Great reminder, Antonia - thank you!

Love the idea of rhubarb in a sponge, esp with a little ginger for kickness!

ha! i recognise this grater! i got one of them for christmas, my first licroplane grater, and i am in love with it! i also love rhubarb - i am surprise to find it in the shops all year round now, it's very springy food in austria! with your inspiration, i might turn a self-saucing apple pudding i made a few weeks ago into a self-saucing rhubarb pudding, which looks like a winner...

Ginger - yes, it is indeed a mini Le Creuset dish. It was a secret santa present at Christmas and I love it too!

Wendy - I know. I was a little surprised to see it this early but when I look back to last year, I was posting rhubarb recipes around this time too. The forced stuff seems to appear earlier each year - rather suspicious! However, I'm not complaining as it is good to see a blast of colour amongst the veg at this time of year.

Beth - it was rather yum! I ate far too much of it.

aforkful - I'm impressed - don't think my father had ever cooked me a thing. I bet he'll be thrilled if you bake him this nostalgic pud.

Anne - I love ginger with rhubarb - they just seem to go together so well.

The passionate cook - I am in love with my grater! I almost find myself zesting citrus over dishes just for the fun of it, regardless of whether they need it or not!

I love this pudding! I do a similar thing with peaches it's delicious!

That looks absolutely gooorgeous!! Rhubarb is my favourite thing - I adore the summer when I can make and constantly eat rhubarb and strawberry crumble :) The sugary top looks delish! x

oh, what a lovely write-up about pudding, im reading this on my lunch break and I'm goign to run downstairs to the canteen to see if they are doing any puds!

egg custart tart or treacle for me any day :)

Antonia - that looks fabulous - sort of like our cobbler at home ! yummm !

Rhubarb and ginger compliment each-other so well! The photos are fantastic.

This sponge looks beautiful with forced pink rhubarb.
I too think that some of our classic puds don't need messing about with.