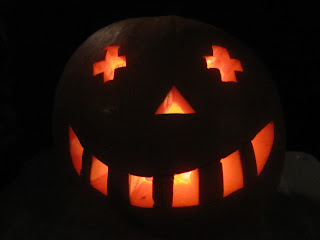 Whilst I understand some people's reservations about Halloween (I must admit I've been fairly aghast by the inches of shelf space devoted to this somewhat dubious occasion), I do like to see kids having fun. As such, I enter into the spirit of things and carve pumpkins and stock up on goodies to offer the trick or treaters that make their way to our door. It is just seven 'o clock and already the supplies are looking a little depleated - we've had a steady stream of witches, ghosts, gouls, grim reapers and skelletons since dark descended. 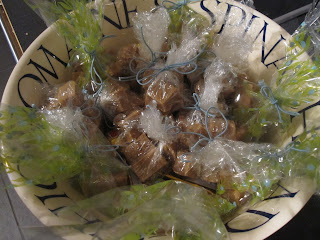 First to go were the little bags of homemade fudge I made at the weekend. I've never had a great deal of success with fudge-making for some reason, but this time I've cracked it. It is a slightly cheaty recipe using condensed milk but I don't care as it tastes just as fudge should - sweet and creamy with that wonderful slightly granular texture. I'm particularly pleased that I finally decided to part with some cash and invest in a sugar thermometer (grand total £4.99). This meant I could relax and judge the moment to take my fudge of the heat by watching the thermometer rather than dropping bits into ice-cold water (...though works well too). 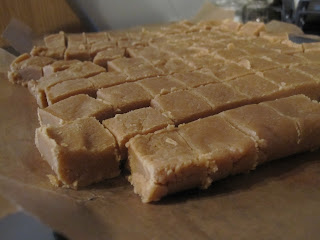 I'm a bit boring in that I like my fudge fairly plain - vanilla is best for me. But this recipe is easily spruced up with various additions - crystalised ginger is a winner, rum-soaked raisins another or walnuts and a dash or two of maple syrup go down well too. Chocolate chips, dried fruits or coffee are other ideas which may appeal.
Foolproof fudge
Adapted from this recipe on the Carnation Condensed Milk website
Makes approx. 60 squares 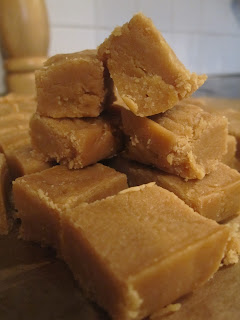 Ingredients:
1 397g tin of condensed milk
150ml semi-skimmed milk
450g light muscovado sugar (or any pale brown sugar)
115g unsalted butter
1.5 tsp vanilla extract
1. Grease and line an 8 or 9 inch square tin.
2. Tip all ingredients into a large heavy-based non-stick saucepan and heat over a low heat, stirring constantly until the sugar has disolved.
3. Bring to the boil and simmer for 10-15 minutes, stirring all the time, until the mixture has reached 'soft-ball' stage. This is when the mixture reaches 116C or when the mixture forms a soft ball when dropped into a bowl of ice-cold water.
4. At this stage, remove the pan from the heat and beat for around ten minutes until the mixture has become thick (but pourable/scrapable) and grainy.
5. Pour and scrape into the prepared tin and leave for an hour or so to set before cutting into squares. 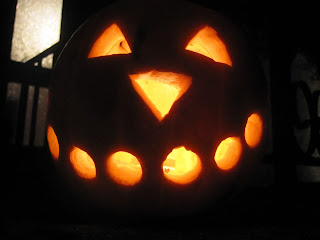 Posted by Abitofafoodie at Monday, October 31, 2011

Email ThisBlogThis!Share to TwitterShare to FacebookShare to Pinterest
Topics: Chocolates and sweets

I have this idea that making fudge is really hard so I haven't attempted it yet. Yours looks perfect and I like the foolproof in the title so may have to give it a go!

I do love fudge and have since I was a babe in arms.

Oh my God…this looks amazing! I cannot wait to try this. I think you hit the nail on the head!, awesome!

I don't I think I could trust myself alone in the house with the fudge, looks so delicious!

That fudge looks so yummy!

Tried making this before but couldn't get the food texture quite right. This recipe worked perfect, thanks!

I tried rushing the setting stage for the fudge, disaster! I had to throw pan and all out. I also didn't use parchment paper in my pan so no way was it coming out. Will try again this weekend and follow directions.