It is beginning to look a lot like Christmas! 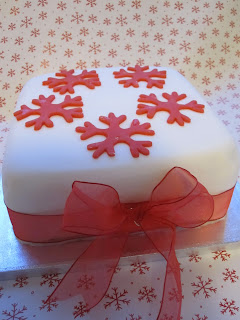 Finally beginning to feel a little Christmassy. All the last-minute preparations are well underway and we are awaiting the safe arrival of my in-laws. I've mentioned before that it will be strange having my first Christmas away from 'my' family but I've really enjoyed planning our own festivities and deciding what we'll eat over the next few days. On the other hand, we've be fairly shocked at how the shopping bills have added up and I now look at my mother's Christmasses with a whole new level of appreciation!
I iced my Christmas cake last night and, have to say, am quite pleased with the results. I've probably only iced one or two other cakes in my life so I don't think this is too bad for an amateur! It is a very simple yet bold design. I can't find any subtle pins, so you'll have to excuse the safety pin that is currently holding the bow in place in these photos.
Here's how I did it... 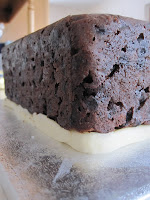 I turned my mature cake upside down onto a cake board to give me a flat surface on the top. I then filled in the gap at the bottom with 'sausages' of marzipan. Using warm apricot jam as the glue I then filled in any major 'holes' in the surface with little balls of marzipan which I then smoothed to give and even-ish surface. Next I rolled out a large piece of marzipan and covered the whole cake, trimming the edges to fit. 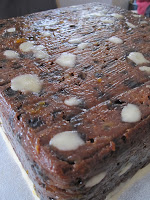 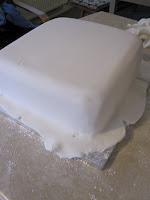 I left the marzipan overnight to dry out a little and then covered with fondant icing, glued on with warm apricot jam. I used my handy 'smoothing' tool to smooth over any cracks in the surface (thought there are still a few on the corners!). Next I rolled out red fondant icing and cut out the snowflake shapes which I stuck in position with a little water. A piece of red ribbon completed the cake! 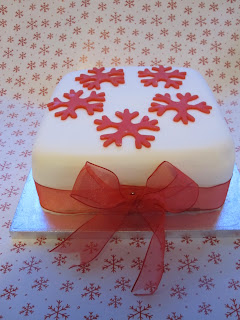 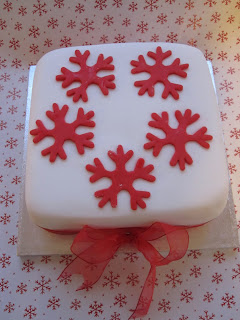 I'm looking forward to reading about everyone's Christmas feasts over the next few days and wish you all a very Happy Christmas!

And just because I can't resist, here is a snowy picture of my rather handsome little furry friend. He's wishes you a Happy Christmas too (he told me so!). 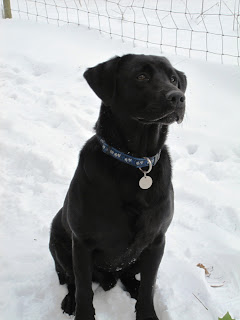 Posted by Abitofafoodie at Friday, December 24, 2010 3 comments: Links to this post 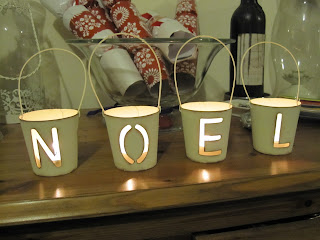 What a month! There has been vitrtually no time for blogging (or cooking for that matter). I've been hard at work assisting with the organisation of the Cirencester Christmas Market, a spectuacular German-style Christmas market which took place in my home town. Hours have been long and I have been completely exhausted upon returning home each day having spent nine hours each day outside in the freezing conditions. 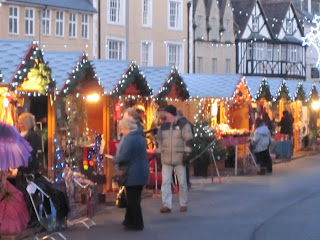 I'm so pleased to finally be 'on holiday' and am looking forward to sharing all the festive treats that I'll be cooking over the next few days. Like many, we have vast amounts of snow preventing us from getting out and about - the perfect excuse to spend time in the kitchen. 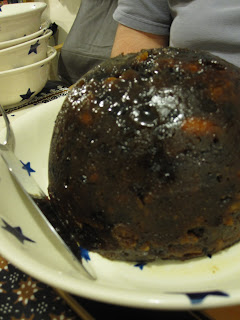 Before I get onto the things that I've been cooking recently, I must post a very overdue review of the spectacular Christmas pudding sent to me by the kind people at Waitrose. I'm a huge fan of Waitrose in general and, as it is my local supermarket, am seen there fairly regularly. The partnership with Heston Blumenthal is one I've been following with interest. To be honest, Heston's style of cooking isn't one that I'm naturally drawn in. I adored a meal at his pub the Hinds Head in Bray I have to admit, but The Fat Duck wizardry just doesn't appeal to me. I do enjoy watching his culinary experiments on television too but I prefer to view cooking as art rather than science.
However, I was intrigued by the sound of the Christmas pudding he has developed for Waitrose. Being Heston, this is no ordinary pudding. It looks like one from the outside, but it hides a little secret! In the centre of the pud is a whole, candied orange. The notion reminds me somewhat of a Sussex Pond pudding which houses a whole lemon and wonder if perhaps this is where he got his inspiration. 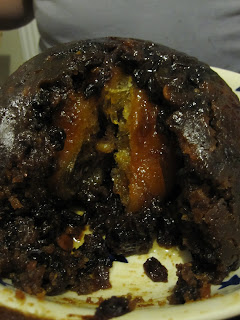 Anyway, I did consider buying one of these myself out of curiosity. But, as always, I have made my own pudding so there was really no need. Imagine my delight to be sent one to review. The pudding is smartly packaged and cooking instructions suggest steaming the pud for best results or microwaving if time is short. At first I was unsure with whom to share this treat - my husband does not like orange and the pudding is large enough for at least eight hungry people. In the end I served it for dinner when my parents came to visit - a pre-Christmas celebration seeing as I won't see them over the next few weeks. 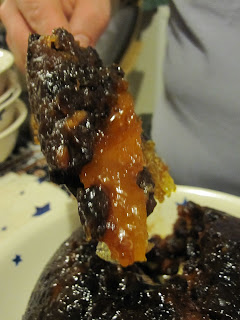 We all looked at the pud with a critical eye - it certainly looked and smelt fantastic. We couldn't wait to dive in and sample Heston's work. We were not disappointed. The pudding was absolutely divine. It was fantastically moist and juicy - I imagine juices from the orange seep out into the pud whilst it is cooking. The candied orange looked very festive in the centre and tasted good too. Even my husband enjoyed the pud although he wasn't a fan of the actual orange, unsurprisingly. The flavour was excellent - a nice balance between fruit and booze with the orange flavour more subtle than you might expect. It is quite a nutty pudding, something that I wasn't so keen on (I prefer nuts chopped very small rather than in big chunks) but others enjoyed. Heston suggests serving with Cointreau butter but I stuck to traditional brandy butter which worked very well too. Leftovers heated up well in the microwave over the next few days and were very much enjoyed too. 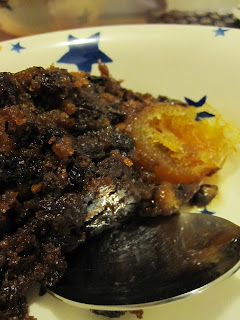 All in all, a thoroughly glorious pudding. My mother found it so good that she raced out and bought one for Christmas Day, despite having already made her own! I might well have considered doing the same but our Waitrose (along with many others) has sold out. I was amused to see that they have managed to secure 5 further puddings and have decided to raffle these off to customers, such is the popularity of Heston's twist on the traditional favourite. This pudding worked for me as it remained true to its roots whilst also being innovative and different. It won't dissappoint the traditionalists but will please those looking for something new. If only I could get hold of another!
Posted by Abitofafoodie at Tuesday, December 21, 2010 3 comments: Links to this post